The GPL v3 Watch List is intended to give you a snapshot of the GPLv3/LGPLv3 adoption for March 29th through April 4th, 2008.

"South Pacific" launched on Broadway in 1949, and Affero Being Added To Our Database.

Just to get the usual updates out of the way, our GPL v3 count is now at 2131 GPL v3 projects in the first week of April and our LGPL v3 count is at 179 LGPL v3 projects. Soon to be added to our database will be the GNU Affero GPL v3, since there has been much talk about the new license recently. There have been requests for us to track the AGPL v3 and as of next week, our database will support the license. Our graphs will also be updated to reflect the adoption of the license. The AGPL v3 has already gained a moderate amount of popularity since it closes the ASP loophole. 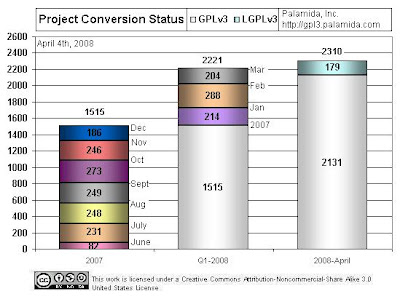 Explained in detail, the amount of new FOSS projects has climbed nearly 20%, with a current inventory of almost 250,000 to choose from. The GPLv3 adoption rates are steady, when viewed with the current numbers. Therefore, based on this big inventory increase in the last seven months, adoption is strong at over 41%, but compared with the initial projections made on 8/13/07, GPLv3 adoption is over 50%, and well on its way to replace its GPL predecessors.
Where do we stand now . . .

For a little background on the development of the formula below, read this first (http://gpl3.blogspot.com/2007/07/gplv3-overwhelming-support-if-you-know.html).

But wait, here is the interesting thing . . .
If we adjust the percentages to correct for the growth in the size of the OSS projects currently available, we see a more interesting trend.

Yes, we did say 5000 GPLv3 Projects
We made a big prediction a few weeks ago (http://gpl3.blogspot.com/2008/03/gpl-project-watch-list-for-week-of-0321.html). If adoption rate continued from this point at 1000 every 4 months unchanged, we would surpass 4000 easily, and adoption rates will. To break it down more, at around 55 per week, 38 weeks remained in the year from this point. This means that if adoption rates remained constant, we would see 2090 more adopted project releases, totaling 4277. How much of a stretch was it to expect the possibility of another 723 project adoptions?
If adoptions increased to 14 per day until the end of the year, up from over 11 at the time of this writing, and two weeks at 20 per day, we would surpass 5000. With an overall growth in the FOSS software inventory of nearly 20% in seven months, an expectation of growth in the daily rate of adoption is both reasonable, and historically accurate.
- Ernest Park
The Research Group

As of today, we have 42 new Affero adoptions:

Software developers with a pending Affero release, please tell us about it. Send us the name of the project, a detailed description, the URL to th bits, and please tell us why you chose Affero. We will highlight your project in a way to inform our readers about who is using Affero and why.

What they are saying about Affero GPL v3

It appears that protection from software patents was a major motivator for this change to the LGPLv3. The LGPLv3 incorporates almost all of the terms of the GPLv3, which includes strong language that requires contributors to grant a license for any patents that may apply to their contribution or else not contribute at all. This protects the OpenOffice.org codebase from any patent claims against it.

The widespread use and distribution of the OpenOffice.org suite via both its inclusion with a number of Linux distributions as well as direct download from the OpenOffice.org web site should engender a level of confidence in the new version 3 of the LGPL and may help increase the adoption rate of that license for other projects.

This move to the LGPLv3 should be a positive thing, a vote of confidence and good news for the Free Software Foundation's new licenses and the open source community in general. The more projects that use widely accepted licenses instead of customized proprietary ones, the better. Wide acceptance leads to a common understanding of terms and expectations for both developers and users.

Note: Here is a look at estimated marketshare worldwide of OpenOffice.

We have seen a number of references to this site, week after week, in notable sources. We appreciate the respect being given to the hard work that we do, and we will make an effort to continually grow our content and stories. If you would like to regularly reprint our content, use customized versions of our graphs, or if you have an interest in regularly translating our site to a foreign language, please send us a note at rdgroup@palamida.com. Some sites that we found are listed under "LINKS" on the right of this page. If we missed your site, please forward us a link.