The GPL v3 Watch List is intended to give you a snapshot of the GPLv3/LGPLv3 adoption for October 26th through November 2nd, 2007. 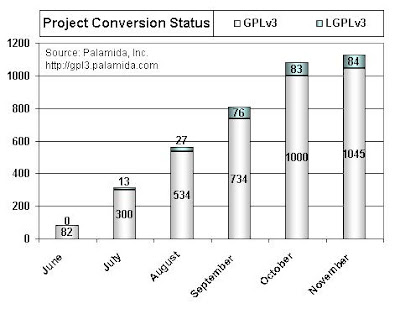 SugarMemo: a learning tool that can enhance the memorizing of your foreign language(s).

Open GTChat: SourceForge.net is introducing a new feature that will let you buy or sell services for Open Source projects right from the site.

Marva: a Web application for the administration of LETS (Local Exchange and Trading System) groups. It has support for contact information and offer and demand and transactions.

In the News Survey:

Open source gaining traction in U.S. governmentMore than half of all U.S. government executives have rolled out open-source software at their agencies, and 71% believe their agency can benefit from the software, according to a survey released Thursday.

Palamida actively takes submissions from visitors on updates on new GPL v3/LGPL 3 projects. We are amazed at the number of submissions we have gotten to date, but even more so, we are incredibly grateful to the more than 100 core contributors who have devoted their time and resources at helping us provide up-to-date information.

Happy Halloween from the Research Team!