The GPL v3 Watch List is intended to give you a snapshot of the GPLv3/LGPLv3 adoption for December 31st through January 4th, 2008.

On the 11th day of Christmas....
The GPL v3 numbers are now at 1414 GPLv3 projects, which is a less than average increase of 34 new GPL v3 projects. The LGPL v3 count is at 140 LGPL v3 projects, up 5 projects from last week. Lastly the GPL v2 or later count is at 6396 GPL v2 or later projects. New additions are still coming in slower than usual, but we expect this will pick up again next week, once the holiday comma wears off. We are glad that our Year in Review report was widely viewed and hope it will stimulate more community participation in our GPL v3 tracking. It is uncertain how long we will continue to track the GPL v3, since its market impact is still not clear, but we have gotten a better idea with the past 6 months of data. 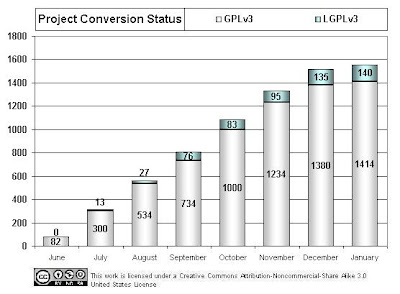 Current Events in Open Source
Eastwood Chart Servlet and GNU Affero GPLv3
Eastwood Chart Servlet is a java-based servlet that emulates the function of the Google Chart API to allow web developers to incorporate the rendering of charts into their web pages. The servlet is hosted on a server and accepts data encoded in a URL, which the servlet processes and then returns in a chart format based on that data. The Eastwood project is interesting and important because it gives any developer the ability to modify or improve a "web services" type of application that emulates the functionality of the closed-source Google Chart API. What allows this ability is the release of the Eastwood source code under the GNU Affero GPL version 3.

The release of Eastwood under the GNU Affero GPL v3 extends the freedoms ensured by the GPL v3 to users of the servlet wherever it is hosted, thereby making modifications to Eastwood's original source code available to such users even though the servlet may only be interacted with over a network connection. In the case of Eastwood, it is not entirely clear how users of the servlet would know that the source code is licensed under the GNU AGPL v3 since there does not appear to be an interface seen by such a user that would allow some type of "interaction" to provide such notice as is one option under the GNU AGPL v3. Possibly some sort of notice might be incorporated into a footer on the chart itself or the host of the servlet would provide such notice on its web page.

Issues such as proper notice under the GNU AGPL v3 will work themselves out, but only in the context of real application. With the popularity of web-based applications continuing to grow, it is important to use licenses that allow the continuous innovation that free software and openly available source code provides instead of keeping these "software-as-a-service" applications fenced in and only available to a limited set of developers.