The GPL v3 Watch List is intended to give you a snapshot of the GPLv3/LGPLv3 adoption for January 5th through January 11th, 2007.

January 11th - Popular Mechanics magazine anniversary
As of Friday, January 11th, the GPL v3 figure is at 1476 GPL v3 projects as compared to last weeks number of 1414 GPL v3 projects. This is an increase of 62 new GPL v3 projects, which is a sign that the rates are picking up again from the holiday slump. The LGPL v3 list is currently at 143 LGPL v3 projects up three projects from last week and the GPL v2 or Later count is at 6404. The last two weeks have been below average, in terms of adoption rates, but now that people are settling back into their jobs, the rate seems to be back to normal. 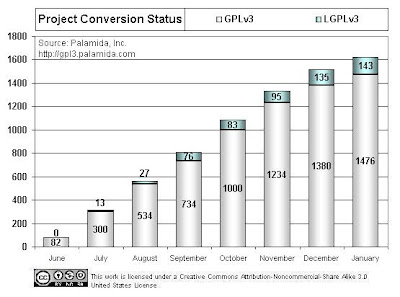 Current Events in Open Source
Here come the open source IPOs
Fortune magazine has published a list of its hot IPO tips for 2008. Three out of the five - MySQL, Ingres and SugarCRM - are open source companies, while another - Parallels - is an open source project sponsor (for the record, the other Fortune tip is ExactTarget). Here’s a look at Fortune’s assessment of the four open source-related vendors, together with a quick 451 CAOS Theory view, and a terrible pun.
http://blogs.the451group.com/opensource/2008/01/11/here-come-the-open-source-ipos/