The GPL v3 Watch List is intended to give you a snapshot of the GPLv3/LGPLv3 adoption for January 12th through January 18th, 2007.

January 18th - Winnie The Pooh Day
Over the past week we have passed the 1.5k milestone. Within just over 6 months, 1535 projects have adopted the GPL v3, which is a growth of 56 GPL v3 projects over the last week. The growth was actually closer to 90 new GPL v3 projects, but we performed an audit on the database to clean out faulty entries. The LGPL v3 list has grown to 148 LGPL v3 projects, increasing in 5 LGPL v3 projects in a week. Lastly the GPL v2 or later count is not at 6411 GPL v2 or later projects. We are well into the new year and GPL v3 growth remains consistent at approximately 50 adoptions per month. If this adoption rate remains consistent, the overall percentage of active projects under the GPL v3 will continue to grow. 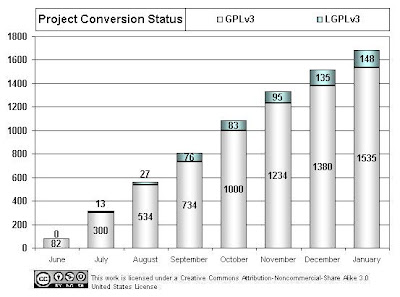 Current Events in Open Source
Sun's acquisition of MySQL
In addition to providing a great boost to the visibility of, and commercial confidence in, free and open source software, Sun's announcement this week of its acquisition of MySQL raises some interesting points to ponder. This acquisition brings benefits to both parties. Sun receives a proven and robust open source database and MySQL will soon be available to major customers worldwide that are part of Sun's existing distribution network, along with enterprise-level support.

MySQL is a very popular database server used alongside Linux, Apache and PHP (together, "LAMP") to provide a web platform based on open source applications. How Sun intends to integrate MySQL into its current product offerings is unclear. With its OpenSolaris operating system and Java programming language, adding MySQL could give Sun a powerful Sun-branded combination to challenge the current popular LAMP configuration for hosting a web platform.

Initially there don't appear to be any licensing conflict issues if Sun were to merely bundle MySQL along with its other software products. MySQL is currently offered using a dual licensing arrangement where it is available either with a commercial license or under the GPLv2. Presumably, with the commercial license Sun will be able to do what it likes with the code as far as integration, but under the GPLv2, going beyond bundling, or "mere aggregation," and into the realm of combining MySQL code with that of another application into a single program can potentially require that the GPLv2 govern the resulting combination.

It will be interesting to watch how Sun begins to position MySQL as a product as the anticipated finalization and closing of this deal occurs sometime in the second half of this year.

In light of projects like Sugar CRM that are under the GPL v3, but have a commercial side, we decided to look for other projects in our database that also had commercial aspects. We found that there were three main variations of commercial
GPL v3 projects.

The purpose of bringing this into view is that the GPL v3 is controversial because of its many restrictions. In the case of putting a GPL v3 project under a commercial license as well, there is high potential to violate the terms of the GPL v3. This is not to say that any of the aforementioned projects are or are not in violation of the license, since our analysis of the terms are not yet complete, but caution should be used if a project is under both the GPL v3 and a commercial license.