The GPL v3 Watch List is intended to give you a snapshot of the GPLv3/LGPLv3 adoption for January 19th through January 25th, 2007.

January 25th - Rambo is out!
The GPL v3 growth for this week is consistent with our average growth rate. As of January 25th, the GPL v3 count is at 1579 GPL v3 projects, up 44 projects over the past week. The LGPL v3 list is growing slowly but steadily and is currently at 150 LGPL v3 projects, as compared to last weeks number of 148 LGPL v3 projects. Lastly, the GPL v2 or later count is at 6440 projects. The GPL v3 conversion is still averaging around 50 projects per week, with the last two weeks bringing in 56 and 44 projects. It is surprising how consistently the numbers are coming in, and as they continue to come in at this rate, the GPL v3 percentage still grows. Once the rate of new GPL v3 projects begins to diminish, we can better gauge how much of the open source space it will occupy. 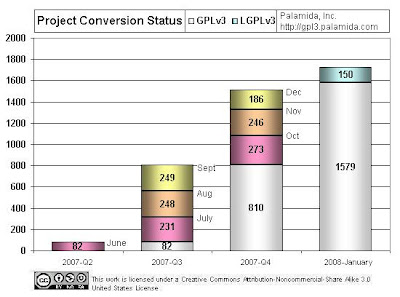 Court Ruling on OSI license
Let's consider what may happen to the OSS movement if the court decision in Jacobsen v. Katzer et al. is upheld. In Katzer, the federal district court in San Francisco held that remedies for a breach of the Artistic License, an Open Source Initiative (OSI)-recognized license, are limited to those in contract as opposed to remedies available for a copyright violation. Contract breaches are usually remedied by monetary damages, while copyright violations can be remedied by injunctions, i.e., forcing someone to stop the violation. This ruling only applies to the Artistic License and is also being appealed, but if it is upheld it could set a disadvantageous precedent for the ability of OSS developers in the future to ensure compliance with license terms.This district court ruling does not apply to the GPLv2, but since it too is an OSI-recognized license, let's say for the sake of argument that the Katzer decision is upheld and subsequent cases cite it as precedent in a case involving a project licensed under the GPLv2. Let's also consider that the MySQL database project, recently acquired by Sun, licensed under the GPLv2, and soon to be adopted more widely in enterprise corporate environments as a result of Sun's support network, it the software project in question.As an enterprise user with a commercial license from Sun for your MySQL installation, the Katzer decision probably doesn't affect you or your company much because your version of MySQL is "closed" by virtue of the commercial license and you don't have to worry about complying with the terms of the GPLv2. However, assume your company supports its own installation of MySQL without the help of Sun. If your company violates some term of the GPLv2 which, in the absence of Katzer would be a copyright violation, what is the remedy? And for that matter, it would be Sun who would have to sue to enforce this as owners of the MySQL code. Is the remedy purely money? Can Sun then force your company to purchase a commercial license in order to continue use of MySQL? If a violation of the GPLv2 is only a contractual breach and not a copyright violation the only remedy may be monetary damages. Could a "forced" purchase of a commercial license be fit into the "monetary damages" box?
Reference:http://lawandlifesiliconvalley.blogspot.com/2007/08/new-open-source-legal-decision-jacobsen.html

Story of the week
Don't Forget About the LGPL v3
The introduction of the GPLv3 was met with much criticism. Lacking the support of some big names in open source, such as Linux, much of the open source community was wary of adopting the license, and many were doubtful of its success. Its delayed release as well as the inconsistent information about its release date caused further anxiety and animosity towards the license. So when the project was finally released, there seemed to be a virtual hush in the open source world, and it seemed that only a few projects were adopting the new license, or at least projecting to adopt the new license. Yet it became apparent over time that the open source community was becoming more amiable; many new projects were released under the GPLv3, and many old projects were converting. As can be contested by the Palamida website, there are now a great number of projects that are released under the GPLv3.

Yet, in all the commotion over the GPLv3, there is another license that seems to have been overlooked: the LGPLv3. The GPLv3 has been getting its fair share of adoptions, but it seems that the number of LGPLv3 has been getting ignored. On sites such as Freshmeat.net, the GPLv3 gets its own repository, where once linked as GPLv3, projects get to join an exclusive list that contains only GPLv3. Yet, the LGPLv3 gets no such love. The LGPLv3 projects remain in anonymity with LGPLv2 projects, tucked away only to be chanced upon by some open source developer. Are there so few LGPLv3 projects for them to receive the attention that they GPLv3 brethren receive? And if the lack of attention is due to the low number of LGPLv3, what is causing these meager conversion rates? This may simply be a numbers game. There are so many more projects released under the GPL than the LGPL, so GPL gets more attention than LGPL in general. Thus, even if the ratio of GPL conversions and LGPL conversions are the same, the fact that numbers-wise there will be more GPLv3 projects than LGPL projects causes people to assume that people are less inclined to use the LGPLv3 than the GPLv3.

Basically, we would be able to see the open source community's true feeling toward the LGPLv3 if we could gather the ratio of new projects under LGPLv3 vs. LGPLv2, and do the same with the GPLv3 and the GPLv2. Yet, the sheer number of open source projects, and repositories from around the world, make this an almost impossible task. So, all that we have to go on is what we can see. And from what I can see, the LGPLv3 is getting very little love compared to the GPLv3.