The GPL v3 Watch List is intended to give you a snapshot of the GPLv3/LGPLv3 adoption for February 2nd through February 8th, 2008.

February 8th - Happy Chinese New Year
For everyone on the other side of the world or anyone who would like to celebrate this week, we wish you a Happy New Year! This week on our GPL v3 database, another 50 new GPL v3 projects have been added, bringing our total to 1674 GPL v3 projects. The LGPL v3 is going slowly with only 1 new project this week making the current count 151 LGPL v3 projects. Lastly the GPL v2 or later number is at 6442 projects. 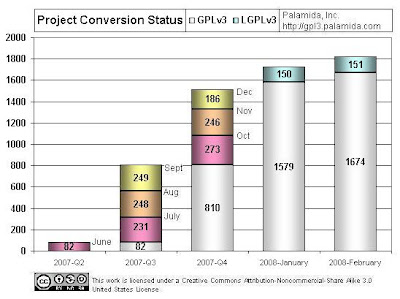 Story of the week Linux a Go for Green
About half a year ago, Linux announce that they would be going green, implementing changes to manage their power consumption. They would rearrange their infrastructure in such things as their server racks and reduce CPU usage in the kernel to reduce their the amount of energy being used. Now, the changes have been made and the new power schemes are good to go.

Torvald admitted that "the operating system was lagging behind on power-management and energy-diagnosis tools". But these new changes will bring Linux up to speed. "New versions of the operating system are being endowed with a "tickless" kernel that forsakes traditional computer time-keeping in an effort to keep the processor in a somnolent, low-power state." By lowering the CPU's energy consumption, this should make the OS more competitive as a laptop OS by extending the battery life.

In terms of licensing, the green movement should not affect their licensing terms, since many of the changes are infrastructure. However, if Linux really wanted to push the green movement, they could include green licensing terms with the kernel to spread the environmental awareness. This is unlikely though since imposing such a regulation, would be in a sense, counter to the open source movement. Regardless, Linux's efforts to reduce power usage is significant since the "tickless" kernel will lower the consumption of everyone using it. The tech industry is already a "greener" industry than others since they use efficient automations, but it is nice to see further efforts being made to maximize power efficiency.