The GPL v3 Watch List is intended to give you a snapshot of the GPLv3/LGPLv3 adoption for February 9th through February 15th, 2008. 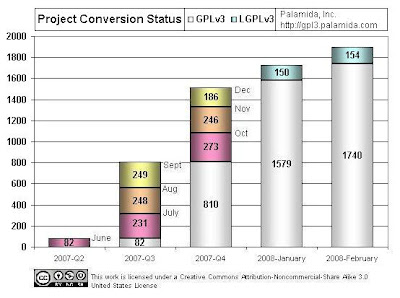 Story of the week
Future of OSS
In a recent Gartner article, the company highlighted its predictions of the IT world in the immediate future, approximately 5 years from now. Two of their predictions that related to OSS were "By 2012, 80 per cent of all commercial software will include elements of open-source technology" and "By 2012, at least one-third of business application software spending will be as service subscription instead of as product license." If these predictions materialize, developers will have to prepare themselves for the repercussions of these changes and what it means to their projects.

Over the next five years it will be critical for both commercial and open source developers to be aware of the license terms that govern the code that goes into their end products. This is necessary to protect the integrity of the software produced in addition to preserving rights granted by particular software licenses. The continuing adoption and popularity of the SaaS model will increase the ease of software deployment, as well as potentially expand the reach and impact of OSS licenses, such as the Affero General Public License, which extends the rights and responsibilities of the GNU GPL license to users who use an application over a network instead of a local installation. Knowledge by IT managers and the education of end users will continue to be of paramount importance to a comprehensive software audit, management and deployment strategy in any organization.

Notable Mention
Palamida actively takes submissions from visitors on updates on new GPL v3/LGPL 3 projects. We are amazed at the number of submissions we have gotten to date, but even more so, we are incredibly grateful to the almost 100 core contributors who have devoted their time and resources at helping us provide up-to-date information