The GPL v3 Watch List is intended to give you a snapshot of the GPLv3/LGPLv3 adoption for February 16th through February 22nd, 2008. 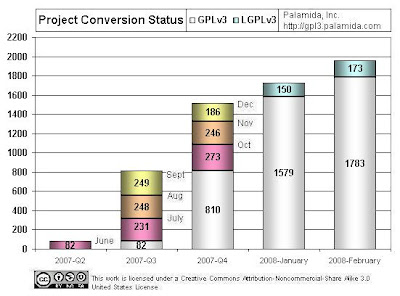 As FOSS grows, so do the legal issues that surround it and the community is going to have to better inform themselves of the code they produce and use. Often we have seen the misuse of a license, perhaps due to the incomplete understanding of the terms. Yes, it can be a hassle applying a license to code that has already taken up much of your time, but if your work does end up being the next big thing you would want it used exactly how you had intended.

Understandably, law is not an expertise of many people in the community, seeing as there are more CS degrees than Law degrees, which is why we muse give thanks to organizations such as the Software Freedom Law Center. They have recently released a thorough document outlining current legal issues in FOSS and information on main licenses. The document, linked to below, is written in non-legalese and is directed to the average Joe, for better understanding of the law behind FOSS. It is a good read for all serious developers of FOSS and even goes over some tax exemptions that are possible for FOSS groups.