The GPL v3 Watch List is intended to give you a snapshot of the GPLv3/LGPLv3 adoption for March 1st through March 7th, 2008. 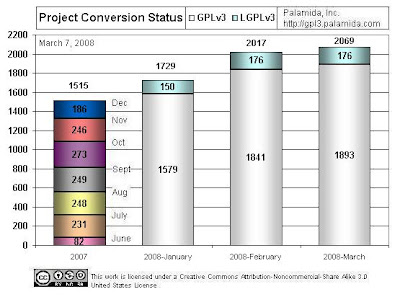 Story of the week
Microsoft Research License Agreement and What it Really Means
This week Microsoft made a Research Development Kit (RDK) for its Singularity OS available to the public. The RDK includes source code, tools and other documentation about the project, all released under the terms of the "Microsoft Research License Agreement" (MSR-LA) and is for "Non-Commercial Academic Use Only."

This is certainly a positive step toward openness from a company whose bread and butter is revenue from closed-source software applications, but is the MSR-LA really an open source license? The license does apply to source code that is available for download, but what can be done with that code once you have it? Consider some of the terms:

1) "You may not use or distribute this Software or any derivative works in any form for commercial purposes."

This is "free as in beer," not as in free speech.

2) "Notwithstanding anything to the contrary herein, you may only use the tools included in the Software to build the Singularity system, or build applications that will run on Singularity."

This is fairly restrictive and makes it impossible to use any of the available tools, no matter how innovative, for anything but this project.

Requiring the same license terms upon distribution is not so unusual, but the inability to grant anything other than the terms of the MSR-LA, even additional terms like those suggested in the GPL, like restricting the use of certain trademarks or offering a warranty on code you create, gives developers no flexibility.

4) Your rights granted by the MSR-LA give you no ability to "subject the Software or derivative works thereof in whole or in part to the terms of any license that requires as a condition of use, modification and/or distribution of software subject to such license that the software or other software combined and/or distributed with such software be (A) disclosed or distributed in source code form; (B) licensed for the purpose of making derivative works; or (C) redistributable at no charge."

5) "...Microsoft is granted back, a non-exclusive, irrevocable, royalty-free, and sub-licensable license to, for any purpose, reproduce, publicly perform or display, install, use, modify, distribute, make and have made, sell and transfer modifications to and/or derivative works of the Software source code or data that you provide to Microsoft through the CodePlex tool or otherwise make directly available to Microsoft."

So if you contribute something creative back to Microsoft they receive an irrevocable and sub-licensable license to your code for any purpose. At least it's non-exclusive, but where else would you be able to use it?

6) "...if you sue anyone over patents that you think may apply to or read on the Software or anyone's use of the Software, this MSR-LA (and your license and rights obtained herein) terminate automatically."

This interestingly parallels with other licenses such as the GPL, which forbids one from suing based on a claim of patent infringement.

This license is nothing if not accurately named. It is certainly intended to keep all creative work produced under it within the scope of the Singularity research project and also within Microsoft itself. The restriction on the code being "subjected" to the various terms of other licenses effectively isolates the code from being used with seemingly anything outside of this particular project. If the goal is to experiment and do research to develop new techniques and tools, the possibilities here seem unusually limited.