The GPL v3 Watch List is intended to give you a snapshot of the GPLv3/LGPLv3 adoption for March 8th through March 14th, 2008.

Here's to a Happy St. Patty's Day, the one day we wish "free" meant "free as in beer". If the open source movement was really about free beer, we would have 59 extra pints, aka 59 new GPL v3 projects this week. That brings our database to 1952 GPL v3 projects, 48 projects shy of the next milestone of 2000 GPL v3 projects. At the rate current adoption, we will hit 2000 projects by next week. If this rate keeps up, the GPL v3 may have 5000 projects under its belt by the end of the year. The LGPL v3 count is currently at 177 LGPL v3 projects and the GPL v2 or Later number is at 6439 projects. 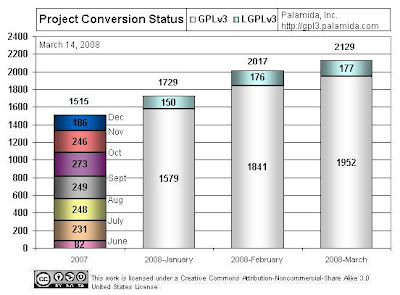 The Linux Foundation is the organization which sponsors the work of Linux creator Linus Torvalds and also, as stated on the "About" page of its web site, "promotes, protects and standardizes Linux by providing unified resources and services needed for open source to successfully compete with closed platforms."

Jim Zemlin, the Executive Director of the Linux Foundation, recently gave an interview to the Australian "PC World" site and discussed many aspects of the state of the Linux operating system and its future. The headline-grabbing statement of the interview was that the Linux Foundation would "love to" collaborate with Microsoft to make Linux more effectively interoperate with Microsoft products, but the other topics discussed were just as interesting, and more immediately relevant to the open source/free software industry in general.

Regarding licensing, he said it is unlikely at this point that the Linux kernel will adopt the GPLv3, but there may still be a possibility at some point in the future. He also mentioned that desktop adoption of Linux-based operating systems is growing with manufacturers like Asus, Lenovo and Dell offering Linux pre-installed on new computers.

He discussed the growth of Linux-based systems on mobile devices, from the Motorola Razr devices to Google's new Android platform. Additionally he mentioned there is an organization of mobile handset manufacturers which is creating a a mobile Linux reference platform for their devices.

The most interesting point he brought up about the open source/free software industry was probably the discussion of how to monetize it. This was one issue that came up in discussions surrounding Sun's recent purchase of MySQL, a company based on open source software development, and how it could possibly be worth $1 billion. Jim goes on to say that because the technology in the open source industry is all out in the open, companies make money in that industry by "innovating at a higher level." For example, companies work to provide good solutions for the management, support and service of open source products.

So a company like MySQL which developed the most popular open source database product on the market, truly creates value by effectively and consistently managing and supporting its product for its users. This value will only improve and increase when one considers the worldwide distribution and support infrastructure that Sun brings to bear.

With the kind of adoption that we are seeing with Linux-based operating systems in devices and the growing realization that open collaboration is the future of software development, it is more important than ever that developers and the companies that employ them be aware of the implications of the use of open source and free software.