The GPL v3 Watch List is intended to give you a snapshot of the GPLv3/LGPLv3 adoption for March 14th through March 21st, 2008.

GPL v3 Has Reached 2000 Projects!!!
Our database now contains over 2000 projects that are using the GPL v3. This is a large milestone for the license, and seems to still be the beginning of wider adoption. Nine months have passed since the release of the controversial license and it has already gained 2k projects. At this rate the GPL v3 is being adopted by 1000 projects every 4-5 months, and if the trend continues, the license will be used by 5000 projects by the end of the year. 5k will be a very substantial amount of projects under the GPL v3, which may influence larger projects to move over the the GPL v3 as well. Then again, the license can begin to cap out, but as of today we have yet to see a decrease in adoption rates. 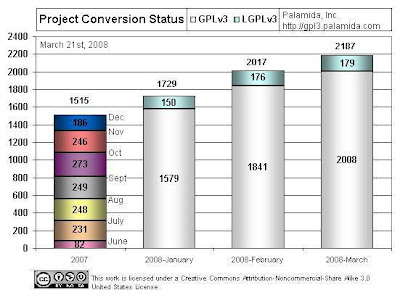 Affero General Public License v3
In addition to the GPL v3 and the LGPL v3, the AGPL v3 is slowly making its small niche in the community. It has recently been added to the OSI approved list, though it was released in November, 2007. With its recent addition to the OSI approved list, a few projects have adopted the license, finding that the extra provisions benefit them more than the standard GPL v3 license. The main clause of attention in the AGPL v3 is that it closes the ASP Loophole that some found to be a flaw in the GPL v3. The ASP Loophole allowed software as a service to retain its changes to the open source code, not releasing it back to the community. Soon we will be adding the AGPL v3 to our database as it is another branch of the GPL v3.

License Link Update
We are also happy to see that many license links have been fixed, directing to the correct version of the GPL. When the license was first released, the FSF put the GPL v3 under the general GPL URL (http://www.gnu.org/copyleft/gpl.html), which was previously the GPL v2 URL. This caused misrepresentation for the projects who were still under the GPL v2, but had used the general GPL URL. Those projects have since changed those links to direct to the GPL v2 URL, which is now http://www.gnu.org/licenses/old-licenses/gpl-2.0.html.