The GPL v3 Watch List is intended to give you a snapshot of the GPLv3/LGPLv3 adoption for March 22nd through March 28th, 2008.

Prepare for April Fools
After reaching our recent milestone of 2k projects, there has been a slow down this week. 34 new GPL v3 projects have been added to our database since March 21st bringing our count to 2042 GPL v3 projects. Our LGPL v3 count is also a bit stagnant, remaining at 179 LGPL v3 projects, and our GPL v2 or later count is at 6446 GPL v2 or later projects. This single week is not a significant sign of an overall slowdown, and we expect that later weeks will have above average numbers to balance out this weeks numbers. 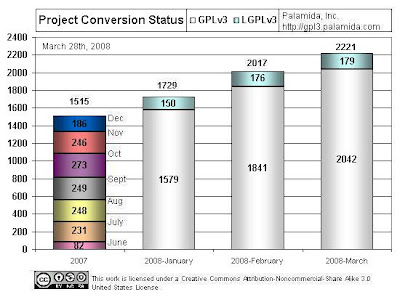 Story of the week
Subscribe to Open Source
In a recent article from eweek, there is a move in open source licensing from perpetual licenses to subscription licenses, for those that are commercial. In the next five years subscription licenses will surpass perpetual licenses by a ratio of 80:20, according to their survey. This trend could be the result of the additional service required for many open source projects. This strategy could also be a result of making open source projects easier to commercialize. If the code is sold, there could be conflicts with the licenses of the sub-projects. However, it may be much easier to offer the code for free and have consumers purchase a subscription to services. This was the code is not the product, but instead the additional services required to keep the program stable and up-to-date are the product, which would not conflict with the open-source licenses of the sub-projects.

This move to subscription licensing could have ramifications in terms of the use of the Affero GPL v3. The AGPL v3 gives developers a way to share the modifications to their code, which is used over a network in the SaaS model. If a developer chooses to license their product in this way, then users of that product will have the source code to all of the developer's additions and modifications to the Affero-licensed product. If more an more developers start using the SaaS model as opposed to a download of code that is then executed on a user's machine, then the use of Affero or a similar license would be necessary to preserve the "free software" principles embodied in the GPLv3 since the GPL has no requirement to make source code available under a "network usage" arrangement. If enough developers want to fully embrace "free software" principles using the SaaS model then adoption of the AGPL for such projects will increase. Given that we will see an increase in the number of projects that are moving to the SaaS model it seems reasonable to expect the adoption rate of the AGPL will increase.