The GPL v3 Watch List is intended to give you a snapshot of the GPLv3/LGPLv3 adoption for April 4th through April 18th, 2008.

The RMS Carpathia brought 705 survivors from the RMS Titanic to New York City, this day in 1912.

Now onto our recently added license the AGPL v3. Last week our database contained 55 AGPL v3 projects. This week we are at 68 AGPL v3 projects, which is an increase of just over 20%. This is a significant increase percentage wise, even though it is only a 13 project increase. However, our prediction is that the adoption rate will rise in number and decrease in percentage as the current amount in the database grows. 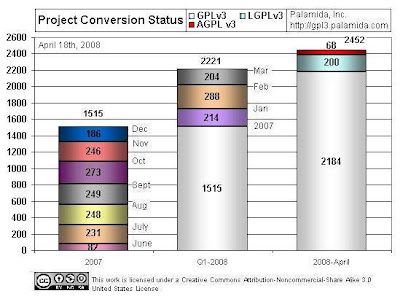 Its OK to Say No
With the recent release of the GNU Affero General Public License version 3 there has been controversy around open source repositories. The problem within the community is that certain repositories will not support particular licenses. But this has always been a problem with all repositories. Repositories are lacking in license options, as there is not a single repository that supports all and every version of licenses.

On the repository side, they are allowed to run their sites however they would like, under the terms that they see fit. Each repository has their own terms or are for particular languages or have some other standards that the projects hosted on it must abide by. The repositories set their rules and the projects in the open source community will join the hosting site that best fits their needs. There will be a natural sorting of all the projects into the existing repos. However, there can be problems once there is a change to open source, such as the AGPL v3. By introducing a new license, repositories must make a decision as to whether or not that license fits the standards by which they run their site by.

This is the main issue that we would like to discuss. It is perfectly fine for repositories to set their own guidelines, in fact they should, so that projects can be hosted on a site that fits their needs. However, when there is a change in the open source space, repositories should be swift and decisive in their decision on how they will handle it. For example, with the release of the AGPL v3 the Google Code repository stated that they would not host the license because it was not OSI-approved. However, when the license did become approved, they said they did not want to host the license because it was not popular enough. Given that both reasons were probably based in their belief of fighting license proliferation, this caused confusion and uncertainty for the projects hosted on the site and in the open source space in general. We would like to suggest that repositories are clear and decisive when there are changes in FOSS, whether it be a yes or no. This would help control the complications that come about with things such as new licenses.

The LGPL has served OpenOffice.org well, so the move to LGPL v3 seemed very logical. LGPLv3 is actually almost identical to GPLv3, but with an additional clause limiting the scope of the requirement to release source code under the same license. (http://blogs.sun.com/webmink/entry/openoffice_org_goes_to_lgplv3).

There are many license available for projects these days, and it is important for them to choose one that will protect their code as they see fit. Since there was controversy around the GPL v3 when it was released, concerning its requirements, the LGPL v3 may be better for those who are looking for a little more licensing freedom, while retaining the protection against software patents of the GPL v3.

Thanks for the Continued Support and Contributions
Our database is partly maintained by our team of researchers as well by the contributions that are received from the community. Here are some submissions we received last week through our online form:

Description:
GNU SIP Witch is a pure SIP-based office telephone call server that supports generic phone system features like call forwarding, hunt groups and call distribution, call coverage and ring groups, holding, and call transfer, as well as offering SIP specific capabilities such as presence and messaging. It supports secure telephone extensions for making calls over the Internet, and intercept/decrypt-free peer-to-peer audio and video extensions. It is not a SIP proxy, a multi-protocol telephone server, or an IP-PBX, and does not try to emulate Asterisk, FreeSWITCH, or Yate.