The GPL v3 Watch List is intended to give you a snapshot of the GPLv3/LGPLv3 adoption for May 2nd through May 16th, 2008.

This day in 1822, the Turks defeated the Greeks in the Greek War of Independence.

For those of you who track our numbers carefully, you will have noticed the large jump in projects over the last couple days. That was partly from the completion of the changes as well as from inputting two weeks of data. We missed last weeks post due to the maintenance. 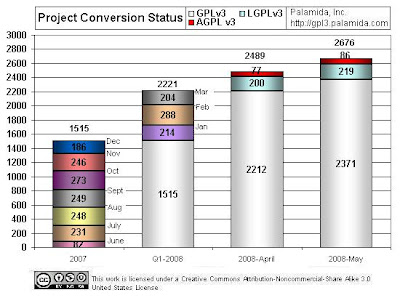 Storage and Computing "on the cloud"

"Cloud services" such as online storage and computing resources have become a popular topic recently, with major players like Microsoft, Google and Amazon offering the use of fractions of their respective server farms to users. Amazon's Web Services ( http://www.amazon.com/webservices ) appears to be the heavyweight so far, offering unlimited computing and storage capacity and no monthly minimum service charges – you pay for what you actually use. However, it is oriented toward developers, not the regular consumer. Amazon's service is divided into a number of different functions developers might need, such as virtual computing environments, simple database querying, storage and a message queue service. These services are fully operational, not limited beta programs. Google's App Engine ( http://code.google.com/appengine/) is also available to developers, making Google's computing infrastructure available to them using Google's development tools. Google's App Engine is available only on a limited basis at this time.

A small sub-industry is developing around making developer-oriented resources like Amazon's available to consumers. Developers of products such as JungleDisk ( http://jungledisk.com/ ) an online backup and storage application, and DropBox ( currently in beta, http://www.getdropbox.com/ ), a content sharing and collaboration tool, write consumer-friendly front-ends to interface with Amazon's underlying cloud infrastructure.

It will be interesting to see to what extent users and developers are willing to allow a third party store and manage their data and computing processes. One huge benefit to doing so is that users and developers have access to virtually unlimited computing and storage resources, available on-demand, which is paid for as it is used. No need to invest in your own server farm. It is unclear at this point whether any FOSS licensing issues will arise as a result of a user's local application interfacing with a cloud-based computing resource. For pure storage-type applications there doesn't appear to be any potential for FOSS licensing conflicts, but it is possible that a cloud-based infrastructure resource that plays a significant role in a tightly integrated computing process including local computing resources may warrant consideration of such licensing issues.

See you later! LGPL's "or later" may be right now at discretion of the user.

In July of last year, I posted an explanation of the reason that we give such significance to the "or later" option associated to the use of a GPL license. http://gpl3.blogspot.com/2007/07/gplv3-overwhelming-support-if-you-know.html. Matt Asay supported my well researched position on the impact of "or later". http://www.cnet.com/8301-13505_1-9798242-16.html

While I always want to believe that developers use our research and analysis of FOSS licensing, this is an example that was posted on the site. The biggest issue here is not that JasperReports is available under LGPLv3. the problem is that OSS licensing can be so complex that thinly staffed and over-worked development teams can unintentionally overlook how a license is implemented, the results of which can have unexpected implications.

As of this week, there are 6739 projects with releases licensed under GPL "or later". While I am sure that a number of these are representative of the support and solidarity that many developers have for FSF and GNU licenses, there may be a large number that are accidentally released under the latest GPL, at the user's choice.

This is from the LGPL v2.1, found at http://www.gnu.org/licenses/old-licenses/lgpl-2.1.html

Note the specific language from section Titled "TERMS AND CONDITIONS FOR COPYING, DISTRIBUTION AND MODIFICATION", section 0 , which reads . . .

"Activities other than copying, distribution and modification are not covered by this License; they are outside its scope. "

After reviewing the information above, in this example, JasperReports version 2.0.5, licenses to a user to distribute and modify under the specific terms and conditions of the "GNU Lesser General Public License as published by the Free Software Foundation; either

version 2.1 of the License, or (at option) any later version", like version 3.

question: Is JasperReports release version 2.0.5 available under the terms and conditions of the LGPL v3?

Thanks for the Continued Support and Contributions
Our database is partly maintained by our team of researchers as well by the contributions that are received from the community. Here is a submission we received last week through email:

....ust wanted to let you know my program is now on gpl3 since the last release earlier this year. The newer alpha version is also on v3.