The GPL v3 Watch List is intended to give you a snapshot of the GPLv3/LGPLv3 adoption for June 7th through June 13th, 2008.

Two More Weeks...
Only two weeks until the anniversary of the GPL v3 license and the creation of this tracking project. We have come a far way and continue to bring relevant and accurate license information. We hope you have made use of our data and have enjoyed reading our blog. 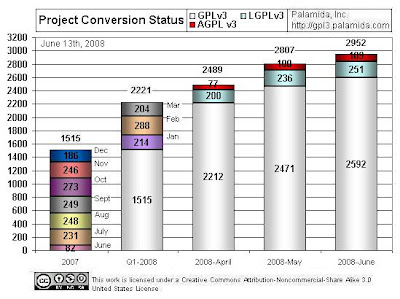 The Open Source "Market" Killed the Tools Market
Though open source tools can be sold, many are offered for free by developers. The open source market is an odd one since the price of the code is, for the most part, just the time to download the software. The fact the most open source code is offered for free makes competition extremely hard you can imagine, which is a gripe of some commercial developers.

In a recent article, John De Goes argued that "The tools market is dead. Open source killed it." Open source has cut costs exponentially for developers, however they are restricted to the licensing terms of the code, which usually keeps it free and open. With so many open source tools now available for free, it restricts commercial companies from using price as a competitive tool since the open source alternative cost zero. So to be able to charge anything for a developer tool, the product would have to be significantly better than the open source alternative. Goes says that this also has a catch to this as well. The cost to learning a new IDE is quite high for most developers, since they are already use to the workings of their current one.

But is killing the tools market really such a bad thing. The death of the tools market was brought about from the birth of the open source market, and those in the open source market would argue that the benefits outweigh the loss. With open source, sharing code has eliminated countless hours rewriting code to do the same exact thing. And though this makes it nearly impossible to charge for your software, the creation of it is significantly easier.

Ohloh is a good site to put things into perspective. On their site, they show the projected cost of the project if it was done from scratch. Right away you can see that some projects would cost millions if not for open source. Subversion, for example, is projected to cost 5.2 million if a team was to write the code themselves. With these gains in cost efficiency, I would say the death of the tools market isn't so sad.

Thanks for the Continued Support and Contributions
Our database is partly maintained by our team of researchers as well by the contributions that are received from the community. Here is a submission we received last week through our web interface:

To stop receiving these weekly mailings, please send a message to rdgroup@palamida.com with the subject "unsubscribe".

The GPL3 project, sponsored by Palamida, Inc (http://palamida.com ), is an effort to make reliable publicly available information regarding GPLv3 license usage and adoption in new projects. The work published on both sites listed below is licensed This work is licensed under a Creative Commons Attribution-Noncommercial-Share Alike 3.0 United States License .

For more information about FOSS management solutions, go to http://palamida.com, or send a note to sales@palamida.com. Please mention the GPL3 site when you reach out to Palamida.