The GPL v3 Watch List is intended to give you a snapshot of the GPLv3/LGPLv3 adoption for June 14th through June 20th, 2008.

The Secretary of State approves the transfer of Wernher Von Braun and other Nazi rocket scientists to the US, this day in 1945. 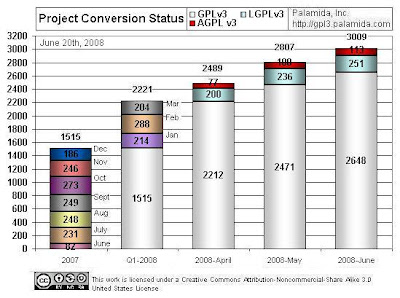 Firefox 3
This past Tuesday, Mozilla released the highly anticipated version 3 of their popular internet browser, Firefox. The release of Firefox, the second most popular browser on the market (only to Microsoft's Internet Explorer), started off with a bang, recording 8 million downloads over the first 24 hours. It is presumed to be a world record for "most software downloaded in a day", currently being reviewed by the Guinness Book of World Records. [1] Created only 4 years ago by a small community of developers, Mozilla Firefox is now challenging Microsoft's Internet Explorer's throne to the browser market, making an even broader statement of the emerging prevalence of open source software in today's market.

Along with a number of bug fixes, Firefox 3 boasts an improved and faster interface, a few design tweaks and a number of new innovations, most notably the search by title function. This feature allows the user to search for previously visited sites by not only the website address, but also the title of the site making it easier for users to find previously viewed sites. A criticism of Firefox in its older releases is that they could hog memory over time, eventually forcing a browser restart. Firefox 3 needs a little less memory and doesn't keep nibbling away at your computer's resources over the day.[2]Due to the open source nature of the browser, a key advantage of Firefox remains to be the availability of over 5000 add-ons on their site.

Although, the new features of Firefox 3 appear impressive, questions about the browser's security are somewhat left unanswered. Just hours after the release, security tool vendor TippingPoint was notified of a "critical vulnerability" affecting Firefox 3.0 and 2.0. The flaw could enable an attacker to run malicious code on a computer, the company said. Like other browser-based vulnerabilities, a person would have to click on a link in an e-mail or visit a malicious Web page to get infected.[3] Although these issues may be somewhat alarming, it is a common misconception that because of the availability of its code as open source software, it is less secure than browsers like Microsoft's Internet Explorer.

Currently, Firefox garners 18.41% of the browser market, still significantly less than Internet Explorer's 73.75%, the most popular browser in the world.[4] Although there is still a long way to go for Firefox to compete for the top spot, the fact that it has only been 4 years since Firefox's conception, as well as Microsoft's decided advantage by packaging Internet Explorer with Windows, makes Firefox's popularity and usage statistics that much more impressive. More so than the usage statistics, what was perhaps the most impressive aspect of Firefox 3's release was the coverage it received not only by tech and internet media, but by the major media outlets as well.

The progression and speed at which Firefox has been developing is a testament to the strength and benefits of the open source software market. Perhaps the most recognizable open source software name next to Linux, Firefox's importance in defining the future of software development will continue to be written by developers around the world. Thanks Mozilla, and keep up the good work.

Thanks for the Continued Support and Contributions
Our database is partly maintained by our team of researchers as well by the contributions that are received from the community. Here is a submission we received last week through email:

"http://www.austlii.edu.au/techlib/software/sino/I noticed it had been released under GPLv3 after I downloaded the sources and
checked the licence.This software has been developed and used for production purposes by Austlii
(http://www.austlii.edu.au/) for a number of years, and they ought to be
congratulated for making it available now under the GPL.-Jason White"

Description:
Sino (short for "size is no object") is a high performance free text search engine written and maintained by Andrew Mowbray. It was originally written in 1995 and has been mainly used to provide production level search facilities for most of the Legal Information Institutes that form part of the Free Access to Law Movement.

To stop receiving these weekly mailings, please send a message to http://www.blogger.com/rdgroup@palamida.com with the subject "unsubscribe".

The GPL3 project, sponsored by Palamida, Inc (http://palamida.com/ ), is an effort to make reliable publicly available information regarding GPLv3 license usage and adoption in new projects. The work published on both sites listed below is licensed This work is licensed under a Creative Commons Attribution-Noncommercial-Share Alike 3.0 United States License .

For more information about FOSS management solutions, go to http://palamida.com/, or send a note to http://www.blogger.com/sales@palamida.com. Please mention the GPL3 site when you reach out to Palamida.