The GPL v3 Watch List is intended to give you a snapshot of the GPLv3/LGPLv3 adoption for July 11th through Juky 18th, 2008.

Following a challenge by President Kennedy, NASA astronauts John Young and Mike Collins launch this day in 1966 and dock the Gemini 10 to the Agena in space.

Catching Up
Over the past couple of weeks, Sourceforge has been doing some maintenance and updates. This backed up some of their data which we use to keep track of the GPL3 numbers. However, as mentioned in our last blog, their last push has updated their files and has added some new licenses, which we will go over in a section below. So now we are catching up on our data collection to bring them back up to date. Three weeks worth of Sourceforge data is quite a lot and will take us a week or two to update. But we do not expect that the rate has changed much during the down time, so the last two weeks of slow numbers should balance out with the next two weeks of high numbers, averaging a rate of approximately 50 GPL v3 projects. 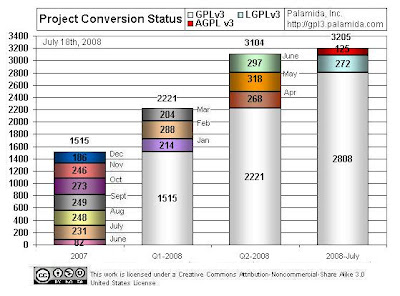 GPLv3 and LGPLv3 Now on Sourceforge
After the release of the GPLv3 and AGPLv3 many repositories made a separate license category for the new licenses, such as Freshmeat and Rubyforge. Sourceforge, however, did not at the time for reasons unknown to us. Perhaps they wanted to see if the license would catch on before changing their already gigantic database to take on a new license. Perhaps they felt the generic GPL category they had at the moment was sufficient for all GPL versions. Whatever the reason, it kept them from distinguishing between the GPLv2 and the GPLv3, that is until this week.

Now projects hosted on Sourceforge have the option to distinguish their GPL and LGPL version. The options developers have to choose from now are between "GNU General Public License (GPL) " and "GNU General Public License version 3.0 (GPLv3) ", as well as their LGPL counterparts. As you can see the distinction is between a generic form of the license name and one specific to version 3 and not between version 2 and version 3. This means that developers have the option to specify that they are using version 3 but do not necessarily have to. We cannot assume that the projects using the generic GPL category are using the GPLv2. It would be a mistake to do so since there are still thousands of projects that are using the GPLv3 and are still listed under the the generic license name. It will take a while for more of the projects to migrate to these new license categories since they have just been implemented this week. It also is a possibility that many will never migrate over since the generic listing covers all versions. For this reason we are going to keep our eye on both categories to see if developers actually do change their license listing. I believe that they will and that the GPLv3 listing will fill up quite quickly. As of this week there are only about 20 projects in the new license category but I expect this to grow at an increasing rate.

Though we do not know why Sourceforge did not create a separate license listing for the GPLv3 from the beginning, the creation of it now does show that the license has gained enough significance in its own right. The GPLv3 has gained many supporters as we have shown through our data and this new development continues to prove what we have been saying all along, the GPLv3 is an important new license. Some developers may not care about the difference between the GPLv2 and the GPLv3, but there crucial differences between the two and how they can be used. This is most evident by all the controversy that revolved around the GPLv3 when it was released that still goes on today. We are glad that Sourceforge has chosen to differentiate between these licenses on their site so that developers can specify how they would like their projects to be used. The previous grouping of all the versions made the terms of the projects on Sourceforge listed under the GPL ambiguous, but now projects can specify their version, at least for the GPLv3. Perhaps if the migration goes well, the generic license will be changed to GPLv2.

Thanks for the Continued Support and Contributions
Our database is partly maintained by our team of researchers as well by the contributions that are received from the community. Here is a submission we received last week through our web interface:

Description:
Omnidic is a free open source dictionary / translator for mobile phones.It works on mobile phones compatible with java (MIDP 1.0 and MIDP 2.0). The program can contain several dictionaries at the same time. For the use of the Omnidic it is not necessary connection to Internet, the dictionaries are saved in mobile.

Link Partners
If you are willing to copy and tranlate the content weekly, please let me know - you will receive the content as soon as it is available, and you site will be listed as a translation. I can send you a bit of tracking code so that you get credit for your contribution to the readership of this site
Post your link on the bottom of the blog page.

Send me a note at rdgroup@airius.com that you are using some or all of the content
I will make sure that we host links to your sites, and we will be able to use your content within this site as well.

The Research Group actively takes submissions from visitors on updates on new GPL v3/LGPL 3 projects. We are amazed at the number of submissions we have gotten to date, but even more so, we are incredibly grateful to over 100 core contributors who have devoted their time and resources at helping us provide up-to-date information.

For more information, go to https://safeview.com/wp431/.

To stop receiving these weekly mailings, please send a message to rdgroup@palamida.com with the subject "unsubscribe:gpl3".

To start receiving these weekly mailings, please send a message to rdgroup@palamida.com with the subject "subscribe:gpl3".

The GPL3 project, sponsored by Palamida, Inc (http://palamida.com/ ), is an effort to make reliable publicly available information regarding GPLv3 license usage and adoption in new projects.

The opinions expressed within the GPL3 Information Blog are exlusively those of Ernest Park, the subjects interviewed and the contributing authors, and are not intended to reflect the positions of Palamida, Inc and its employees.

This work is licensed under a Creative Commons Attribution-Noncommercial-Share Alike 3.0 United States License .

For more information about FOSS management solutions, go to http://palamida.com/, or send a note to sales@palamida.com.

Please mention the GPL3 site when you reach out to Palamida.