The GPL v3 Watch List is intended to give you a snapshot of the GPLv3/LGPLv3 adoption for October 13th through October 19th, 2007. 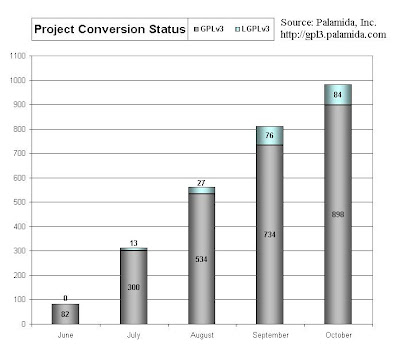 New project conversions this week include:
Grester: a Maven2 Plugin for the Jester Tool, written entirely in Groovy. It was born out of a need to quickly test junit tests with Jester from within Maven projects.
Gazest: a wiki inspired by Git and Mercurial. It preserves the full history graph of every revision to enable branching and merging. The look and feel is trivial to change.
Todop: a cgi python script implementing a simple GTD (get things Done) todolist.

In the News
Ubuntu to release v7.10 of its desktop, server OSS.

The latest desktop and server editions of the free, open-source Ubuntu Linux operating system will be released on Thursday. They will offer a range of improvements designed for their particular users.http://www.computerworld.com/action/article.do?command=viewArticleBasic&articleId=9042882&intsrc=hm_list