The GPL v3 Watch List is intended to give you a snapshot of the GPLv3/LGPLv3 adoption for November 10th through November 16th, 2007.

We would also like to ask for more community support in maintaining the accuracy of our database. As our database becomes larger, community support would be highly appreciated in updating our entries. We are asking that developers help us verify their project's information, such as a simple "thumbs ups" on our current information. We also would like to thank those who have already done so and have contributed to our database, especially to contributors like Davide Prina who has made 44 entries alone. 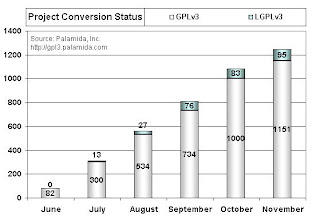 In the News
Microsoft's Bill Hilf Reveals Its Open Source Strategy
The man in charge of Microsoft's strategy for living in harmony with Linux lays out
the company's opportunities with open source and the open source business model.
http://www.informationweek.com/news/showArticle.jhtml?articleID=203100965

Notable Mention
Palamida actively takes submissions from visitors on updates on new GPL v3/LGPL 3 projects. We are amazed at the number of submissions we have gotten to date, but even more so, we are incredibly grateful to over 100 core contributors who have devoted their time and resources at helping us provide up-to-date information.