The GPL v3 Watch List is intended to give you a snapshot of the GPLv3/LGPLv3 adoption for November 15th through December 21st, 2007.

December Happy Holidays
We would like to wish everyone happy holidays and start a wonderful new year next week. The year is coming to an end and the GPL v3 adoption has made it past 1300 GPL v3 projects. The current count is 1372 GPL v3 projects , up 30 GPL v3 projects from last week. The LGPL v3 count has also increased to 131 LGPL v3 projects, as compared to last weeks number of 125 LGPL v3 projects, and the GPL v2 or later count is at 6389 GPL v2 or later projects. In just a bit over half a year, the GPL v3 adoption has accumulated to over 1,500 projects, including LGPL v3 projects and we expect this to continue to grow through out 2008. Also next week will mark the 6 month anniversary of the GPL v3, as well as our 6 month anniversary of tracking the license. We will release a more in depth analysis, reviewing the data up to the day. We appreciate all the user contributions and look forward to more next year. 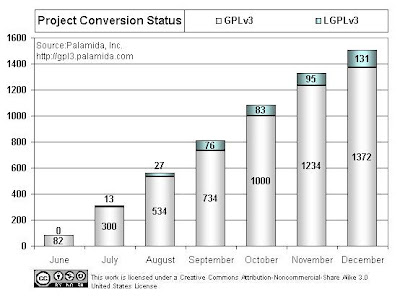 In the News
2007: Open Source, Patents, SCO, And More
2007 is a year that will long be remembered in the open source and Linux communities. It was a year in which the
twin underpinnings of what makes open source successful and what could serve to destroy it made the headlines.
http://www.internetnews.com/bus-news/article.php/3717841